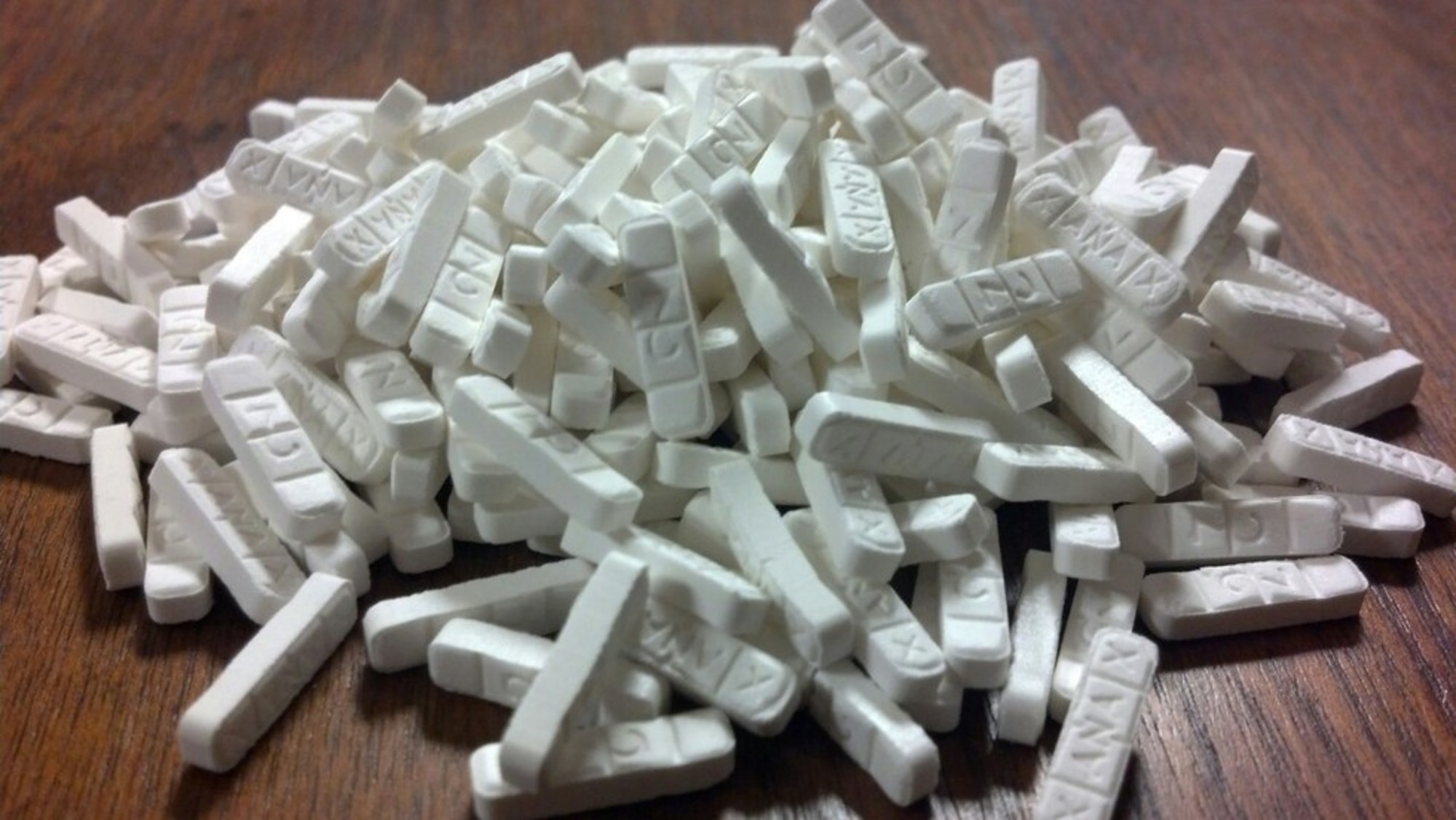 “I have lots of stories from being on Xanax, I just don’t remember any of them.” Your name doesn’t have to begin with Lil’ to explore the effects Xanax is having on young people. Shannon’s here to give you the comedown…

I’m writing to thank you for all the great things you’ve given us. From Donald Trump to fast food, we say thank you. And we really are grateful for your latest gift… Xanax.

It seems in recent years you don’t have to be a pill-popping housewife or a rapper with face tattoos to have a Xanax problem, because as with all drugs, Xanax isn’t discriminatory. No matter who you are, it will embrace you with zombie-like straight-open arms. And whether Xanax has been a shoulder for you to cry on or a night out with a queue jump straight to amnesia – and I’m not talking about some trendy Ibiza club – it’s hard not to notice the uptick in counterfeit Xanax-popping amongst young millennials. So where has it come from, why is it so popular and what level of Xanarchy is it creating?

Youth subcultures can often be defined by their drug of choice: acid for hippies, ecstasy for acid house ravers and… Xanax for millennials? And who are we to thank for it? Pfizer the leading pharmaceutical company with assets of 171 billion dollars that creates Xanax? Or is it the new wave of rap culture armoured with face tattoos, and a first name that their mothers definitely didn’t give to them? I guess it’s both. These post-emo revival hip-hop rappers have provided pharmaceutical companies with the greatest source of free advertising they could have asked for. Their fame has soared on SoundCloud and Instagram, where looks and personality carry just as much under the influence as the music itself. Visions of spikes and streetwear serenades its way into our generation’s open ears singing one melody they’re soon addicted to: Xanax. When you wake up, you’ll throw on your ‘I NEED A XANAX BAR’ t-shirt, on your birthday you’ll cut your giant Xanax bar birthday cake like Lil’ Pump, and maybe if you’re committed enough, you’ll even die in the same way as Lil’ Peep, aged 21.

But surely if these famous, rich individuals can take Xanax, it must mean they’re safe. After all, they are a prescription drug, made by doctors. And if someone addicted to Xanax like Lil’ Peep (prior death) can sit front row at fashion shows alongside Carine Roitfeld, former editor in chief of Vogue Paris, sporting a Balmain jacket,who’s to say they’re not glamourous. At £2 a pill in the UK, just about anyone can sit front row in the Xanax show. This ‘designer drug’ gives you the head-to-toe outfit that’s as addictive as heroin, but free of judgment – making it much more fashionable to brag about. It’s appears as though despite the deaths young people have created a mystique around the danger of Xanax. With one swallow you can romanticise death whilst proving your young invincibility.

£4 for a night you won’t remember whilst also making questionable life choices, who can put a price on that?

Xanax, known as Xans, are a prescription drug created to treat anxiety and mental illnesses including depression. With an effect twenty times stronger than Valium, users feel free of inhibitions and social anxieties, allowing them to be the Lil’ person they’ve always dreamed of. If you’re a young person or student on a budget, you might pop a bar or two to save money on your bevs, because in no time you’ll look and feel like you’ve taken ten vodka shots to the eye. £4 for a night you won’t remember whilst also making questionable life choices, who can put a price on that? Your local dealer can, the person that purchases Alprazolam from the dark web, mixes it with some other miscellaneous goodies and presses it into bar shape, sold to you counterfeitly labelled as the ‘legal’ treat: Xanax. According the NHS Xanax was prescribed only 14 times in 2016, making every other Xan bar out there dubious to say the least.

As a young individual I’ve witnessed first-hand the effect of Xanax on this generation, and within 24 hours of posting to my Instagram story asking for people’s experiences regarding Xans, my inbox was overdosing on embarrassing stories, dangerous situations and unfortunate mental and physical illnesses. From one girl telling me about the time she cheated on her boyfriend in front of him, another person breaking their ankle twice, to an abrupt reply of “DON’T DO XANS,” I was served a cocktail of dangerous driving, dodgy tattoos, hospital visits and naked photoshoots, all leaving the same aftertaste of: ‘I don’t remember.’ And once I dabbed my fingers further into the baggy I was hit with a comedown of mental illnesses, seizures and addictions. It illustrated to me that what could’ve been an innocent party drug or a way to comedown comfortably is actually a glittered and glamorised cry for help.

Statistics show under 1% of the NHS budget goes into young people’s mental health and by 2020-2021, 1 in 3 young people will have mental health issues. 2 in 3 of these will receive no support, leaving thousands of young people anxious, depressed and suicidal. But where the NHS is absent, Xanax is present. Ready to welcome young people to a hazy life of numbness, free of feelings and emotional imprisonment, it’s mental freedom in a bar. In 2018 the National Union of Students conducted a study involving 2,810 UK-based students, in which they found mental health featured prominently as an explanatory factor for drug use. One-third of students who used drugs said they had done so to deal with stress, while almost a quarter of them said they use them to self-medicate for existing mental health problems.

Ready to welcome young people to a hazy life of numbness, free of feelings and emotional imprisonment, it’s mental freedom in a bar.

And of course, this type of self-medication doesn’t come with professional medical guidelines and safe dosages, only a dealer looking for money, who will more than happily sell you 20mg a day of Xanax so you can keep on top of your addiction. All the while Xanax keeps on top of ruining your life, always one catwalk step ahead. Unfortunately, addiction to Xanax can cause an individual to suffer from amnesia, psychiatric disorders, rage, depression and death, especially as users are taking counterfeit bars which contain unknown, unsafe substances, which when mixed with other drugs or alcohol is are more deadly. And although some individuals will argue that they take Xanax to purely self-medicate for a mental illness, you have to question the reality that Xans are probably more of a numbing agent then a solution, leaving you worse off than when you started.

So, you’ve officially changed your first name to Lil’, got a face tattoo you don’t remember getting and lost some of your friends… in all senses of the term ‘lost’. You want out, Xanax isn’t your friend anymore, so you’ll just stop taking them, surely. Wrong. Xanax is the one friend that just won’t fuck off. And if it does, going cold turkey on a Xanax addiction has serious health implications, from psychosis to seizures. Professionals tend to agree that the best and safest way to conduct benzodiazepine detoxification is through a combination of psychological support and gradual dose tapering. And even if the NHS is failing to provide you with the psychological support you need, speak to friends or family, anyone who’s not on Xanax. Coming off the last dose can cause paranoia of death, in fear that your body can’t function without the Xans, leading to suicidal thoughts.

I went into conducting this article with a semi-open-mind because at the end of the day if it wasn’t this generation it would be another, if it wasn’t rap music it would be another genre, and if it wasn’t Xanax it would be another drug. However, it’s important that everyone knows the harsh truths of Xanax, whether they’ve considered taking them or not, because the only high I’ve gathered from this drug is a low. From the coolness of rap culture to its criminalizing clout, the influence Xans has on youth culture is detrimental in defining the generation of today. You need to look at what the high is and how far you’ll come down from it, because when it weighs in, you’ll see it’s not worth it.

Struggling with drug abuse? Frank, Mind, and Bristol Drugs Project can help. Do you think Xanax is a problem? Let us know in the comments. Draw My Life: How Weed Affected Me

We worked with some guys to make a film about bettering yourself and maybe smoking less weed.
Social Issues / March 30, 2015 / Hal Morrell-Samuel My On-Off Relationship With Alcohol

Jodie discussing booze culture and whether you need to be drunk to have a good time.
Lifestyle / January 16, 2017 / Jodie Sutton Shannon is in her final year at UWE studying English Literature with Writing. She also has a pre-degree qualification in Fashion Promotion. Her passions lie in creative writing and journalism, and she finds it hard not to be creatively motivated surrounded by Bristol's energetic vibrancy. She loves creating content for Rife as she admires how youth culture constantly reinvents itself, allowing her to be continuously inspired to indulge creatively in contemporary art forms and literature. After her degree, she hopes to successfully establish herself as a writer of fashion and contemporary culture, all whilst wearing head-to-toe Versace and a feather boa. A Spoonful of Sugar Dating