A Crash Course in the Wonderful World of Spike Lee

Don’t know where to start with Spike Lee’s films? Here are five of his greatest hits as ranked by Asmaa.

Spike Lee may have won his first Oscar for BlacKkKlansman in 2019, but he’s long been putting out Oscar-worthy work. He’s not the first black creative to have been snubbed by the ceremony. There has always been a long list of black people who have missed out on an award, and the recognition of this culminated in the #oscarssowhite protest of 2017. This Oscar has been long overdue, but if Spike’s happy,

Spike jumping into Sam L. Jackson’s arms at the Oscar’s, media via ABC.

I started watching Spike’s films a few years ago while looking for films that centred on more diverse voices. Spike’s films are some of the best out there, because they delve into the black experience. His first few films were made independent of any studio, and his films following that have always been made with his unique style and vision, regardless of whether they were commercial successes or not. He has made consistently good movies, innovating the cinematic form with his signature style. He’s also the OG of making content for black people by black people. He has been doing what Ryan Coogler (who is incredible) recently did with Black Panther for decades. He’s collaborated with people like Denzel Washington and Ruth Carter and given them, their first jobs, as well as the space and the roles to create truly excellent work.

So without further ado, here are my five favourite Spike films ranked from the best to the very best:

In BlacKkKlansman Spike takes an almost too-good-to-be-true story and turns it into an almost unbelievable film.

The film stars John David Washington (yes that is Denzel’s son), who plays Ron Stallworth, the first black officer hired by the Colorado Police Department. Yes they are racist – surreally racist. Stallworth manages to infiltrate the Klu Klux Klan.  I don’t want to ruin how, but best believe there is a tonne of KKK racism and comparison of Trump, with the leader of the KKK who calls himself, get this, the Grand Wizard.

It is also a bit of history lesson, in terms of  where the racist stereotypes of black people come from. Specifically, in a particularly meta-moment, the film talks about one of the first films to set up the trope of the ‘black savage man who assaults white woman’: Birth of a Nation. For this reason and many others, it’s an important film, but as black person watching this in the cinema with a majority white audience, it did feel incredibly jarring. Especially when some of the racist incidents were played for laughs.

As with all Spike films this film is also surrounded with controversy. In reality, Ron Stallworth, helped Cointelpro in his lifetime which was an FBI investigation set up to take down black activist groups, and although the film paints him in a good light, it is entirely based on his memoir, with all the other evidence destroyed. Make up your own mind about it! 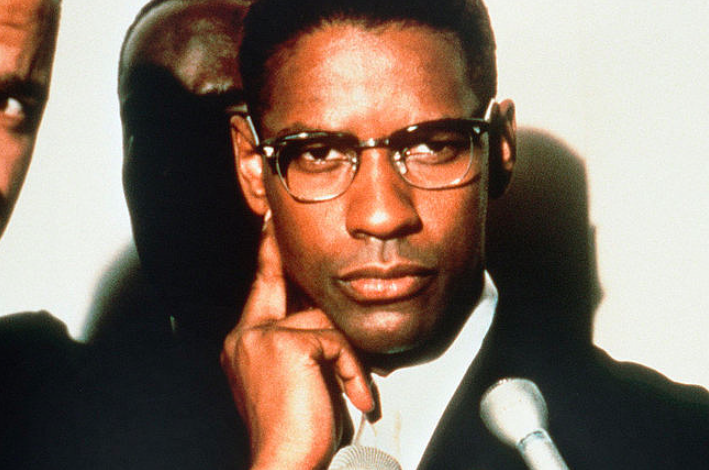 We all know Malcolm X is a great figure of civil rights, and a hero to many. But do you know him as played by Denzel Washington? That’s right, the Denzel Washington plays him and does an incredible job. It’s a long watch (3h 22 mins),

Media from Malcolm X via giphy.

But it’s worth it.

Grab the popcorn, because Denzel has layers! I’ve watched Denzel act before and I’ve never seen him like this. He builds up the character of Malcolm with so much complexity, inhabiting his contradictions within the Nation of Islam that he was initially a part of, and responding to the racism of the 50s.

Spike really takes on a saga length, which really works in his favour in terms of really getting into the meat of Malcolm’s life. Some tasters: Malcolm used to call himself Detroit Red and was involved in a burglary. 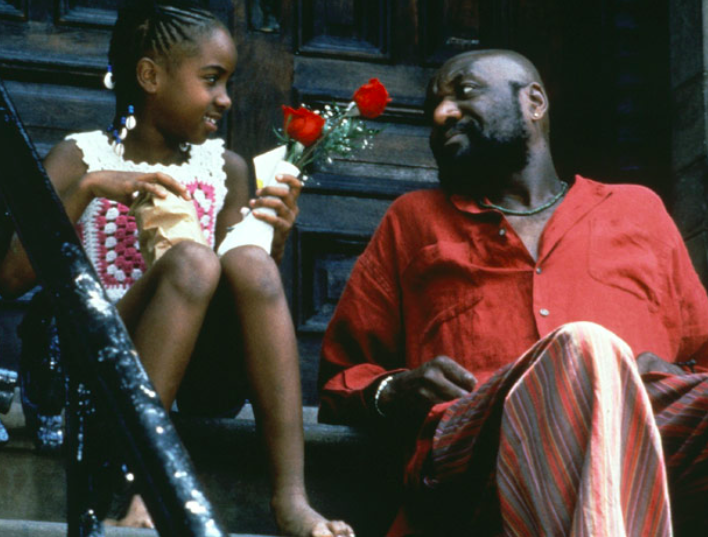 Troy, played by Zelda Harris and her father. Still from Crooklyn (1994)

This is a semi-autobiographical film, and it certainly reads like one. It is filled with everyday mundane joyful experiences of a black family in Brooklyn. Of course, tragedy strikes otherwise it wouldn’t be a story. But what it does show is black love, and black joy. No capitalising on black pain for views here, folks.

I find the whole film so moving because I could recognise the scenes filled with faces that looked like mine. The film follows a young girl, Troy, played by Zelda Harris in the Summer of 1973, and her family. It is a coming of age story, and it really is a joy to watch Zelda act up a storm. If it’s a cold day out, give this a watch – the visuals will conjure up balmy summer weather. If you want a film that represents a voice not often heard, this is the one to watch. 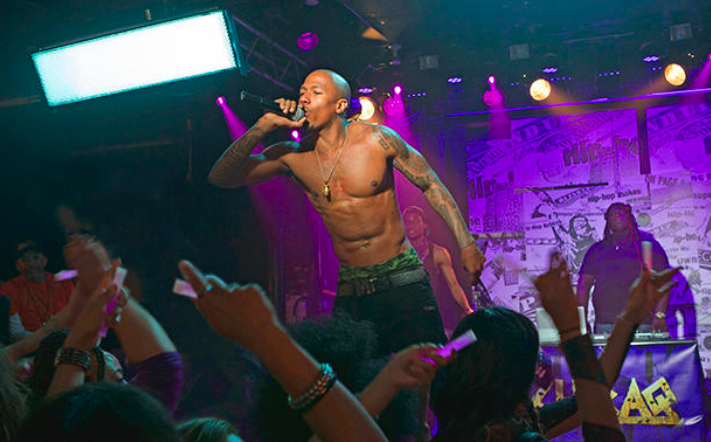 Don’t @ me, but I love Chiraq. It might not have been a critical darling but it’s one of my favourites.

The film, set in Chicago, is an adaptation of , an ancient Greek comedy, about women who go on a sex strike in an attempt to stop war. In Chi-raq the ‘war’ is between two rival gangs: Demetrius (played by Nick Cannon) a rapper and the head of the Spartans and Cyclops (Wesley Snipes) the head of the Trojans.

This film sparked controversy, partly because of its central idea that gang violence was responsible for most of the killings in Chicago. This is a damaging myth, especially when the police response has been to send tactical crime units to destroy gangs, thereby hurting economically disadvantaged neighbourhoods that have majority Black and Hispanic communities.

The entire film is in spoken word, but don’t be put off by that. It’s surprisingly great, has insane visuals, Samuel L. Jackson’s narration, and the immortal Angela Bassett. It’s a great, visually inspired, colour-filled ride. 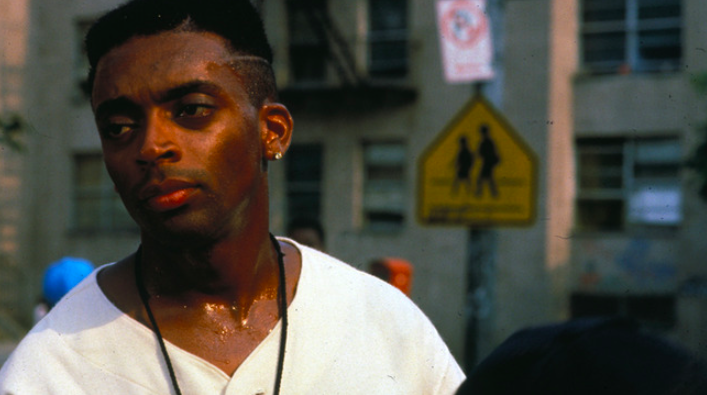 Mookie, still from Do the Right Thing (1989) via Criterion Collection.

Now this one is a classic, arguably one of the best films Spike has ever made. However, it was snubbed at the 61St Academy Awards. This film is so good, I wouldn’t even recommend watching it first – start with the second one up the list and then come back to this one. It truly is genius.

The film follows Mookie, a pizza boy in a Brooklyn neighbourhood on a hot summer day. We follow him around as he slacks off work and meet the unforgettable characters who live in his neighbourhood – that is, until racial tensions boil over.

Everything in this film is brilliant, not least the soundtrack.

But to me it’s great because it shows how insidious racism is, and how it can creep into daily life. It can be spread by someone you work with, or are friends with, or you see every day who somehow maintains inexplicably bigoted ideas. Do right thing, and watch it!

Wham, bam, thank you Spike! For real powerful, punchy films Spike’s are the ones to watch. Each detail is intricately thought out and considered, despite it feeling like an enormous production. He’s done films about everything under the sun, these are just a small handful. So, get to watching his greatest hits – and start with the ones above.

Do you agree with this ranking? Do you think there are better ones? Tweet me – I’d love to hear what you think. Are There Too Many White People On Our Screens?

Are too many films and television series being dominated by an all-white cast, asks Neave.
Film / July 20, 2017 / Neave Allen To all my fellow plant murderers out there, where y'all at.
Fun Stuff/Lists / Guide / March 28, 2019 / Asmaa Jama
<PreviousNext>