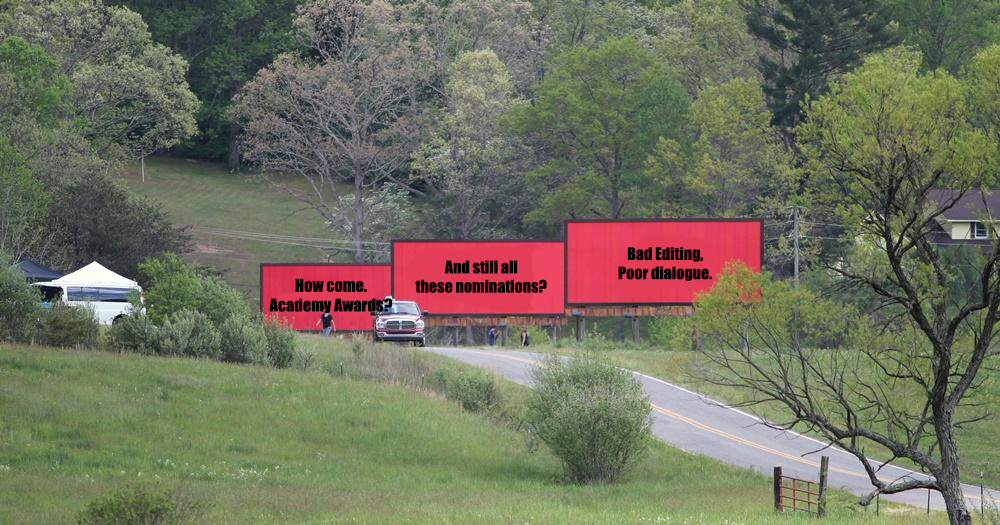 Swing and a miss – is Three Billboards Outside Ebbing, Missouri 2017’s biggest cinematic letdown? Hamish Craig has his say

Spoiler Warning: This article discusses the ending of Three Billboards, so if you have yet to watch the film, read this after.

I remember first seeing the trailer for Three Billboards Outside Ebbing, Missouri and having one thought in mind: ‘I have to see this film’. A tale about a mother seeking redemption for her daughter’s murder through exposing the towns local police force, seemed unique and strangely funny. Everything indicated that Three Billboards would be a fun experience.

The film began. Things happened. The film ended. I sat there confused and slightly annoyed.

I headed to a screening with two friends who were equally excited. We bought our tickets, sat down, and prepared ourselves for a great time. The film began. Things happened. The film ended. I sat there confused and slightly annoyed. However, these emotions quickly subsided as I realised that I no longer had to endure the mess that was Three Billboards. My friends turned to me, satisfied with whatever just occurred in front of their eyes. “That was awful,” I said, disgust clear in my voice. They thought I was joking, and only after spending the whole journey back debating the film they believed I was being serious.

A few weeks passed by and I decided my controversial opinion on Three Billboards needed to be reaffirmed. Thus, I decided to go and watch it again, this time at a smaller independent cinema. The seats were almost full, and the audience were a mixed bunch. The lights dimmed and once again, the film began. The crowd responded with an occasional laugh here and there, contrary to the empty silence that lingered in my previous viewing.

I, on the other hand, remained unimpressed. Once again, Francis McDormand’s performance as Mildred was the only positive feature. Her character’s change from grieving mother to radical was portrayed excellently. You could feel the outer shell of this level-headed woman was gradually cracking through desperation.

Yet, her performance was dragged to a halt by other characters in the film. I believe that Sam Rockwell and Woody Harrelson gave a good performance with what they were given, but ultimately were let down by the writing and direction.

For example, Chief Willoughby, a man who is supposedly an integral part of Ebbing’s community (a community which appears non-existent as it is only mentioned through dialogue), was hindered by Harrelson’s muted performance. Whether or not this was intentionally done, I don’t know, however the Chief’s character needed a greater sense of charm if he wanted to gain any sympathy from me. Much like the location of Ebbing, Willoughby failed to gain my interest. The town was a mere canvas for Mildred and the film’s second protagonist, Dixon  to paint on, their colours too bright for the other characters to even get noticed.

Despite Rockwell picking up an Oscar for Best Supporting Role, his portrayal of a slow thinking, corrupt policeman was over-the-top

Despite Rockwell picking up an Oscar for Best Supporting Role, his portrayal of a slow thinking, corrupt policeman was over-the-top, and came across as some Cletus knock-off from The Simpsons. His stumbling comebacks, questionable relationship with his mother and shocking racial views meant he played into the stereotypical Southern yokel. Although his character is explored and developed, any attempts to humanise him fall short, leaving a lack of resolution.

Even towards the end of the film where it seems like things are about to pick up in terms of plotline and character development… the film just ends. It’s like you’ve watched a whole film which is the setup to a climax. I understand that the film is not about ‘action’ – or maybe I have missed the moral message – but I really don’t think I have. As the film so obviously and awkwardly states, ‘anger begets anger,’ and the ‘climax’ shows what this implies.

In the final scenes of the film Mildred and Dixon are driving to kill someone who they ‘think’ raped and murdered Mildred’s daughter. At the end of the day, the characters have learnt nothing. They are both about to commit a violent act out of anger and irrationality, traits which they most certainly lay claim to at the beginning of the film.

If there is one thing that you can argue has changed, it’s that Mildred and Dixon are now civil towards one another – that is, when they’re teaming up to kill someone. Again, I can hear some of you saying: “how do you know that they’re definitely going to kill this person, huh? It’s an ambiguous ending” – to which I say yes, you’re right. However, if they do somehow manage to come to their senses during the journey, any chance of this tedious film becoming entertaining has vanished.

Any chance of this tedious film becoming entertaining has vanished

If you who disagree with me, you probably think that I simply misunderstood the film’s point or that I can’t appreciate the artistry behind it. Yet I don’t have to understand a film to enjoy it. Take 2016’s Trespass Against Us, a film rich with character as well as a muddled sense of direction. I can forgive this if the characters are worth watching. This is where my issue with Three Billboards lies. The near two-hour run time is made even less bearable because the only character which has any value is McDormand’s Mildred.

This is a film which has left audiences with split opinions, which is often considered a good thing when it comes to responses to art. For me, I shall give Three Billboards one final chance when it surfaces on DVD release. With one swing left, I’m hoping it doesn’t strike out.

What did you think of this article? Let us know @rifemag Queer Clubbing in the 80s: Why You Need to See ‘King’s Cross (Remix)' We went to the home of The Yogscast - Minecraft's biggest players

Jon and Little Ryan went to every Minecraft player’s Holy Land – Yogtowers – to find out what all the fuss...
Arts/Culture / October 6, 2014 / Jon Aitken Hamish is in his final year of studying English Literature and Creative writing at University. He spends most his time watching films, trying to create a back catalogue for his future career as a film critic. The rest of his time is spent soaking in the sneaker culture, keeping an eye out for the next release date or scouring eBay for trainers older than he is. Scared of working an average nine-to-five, he hopes to land himself with a role within these industries, letting his creativity and passion roam free. You can catch him on a night out with a cider in hand, enjoying Bristol and its diverse music scene.