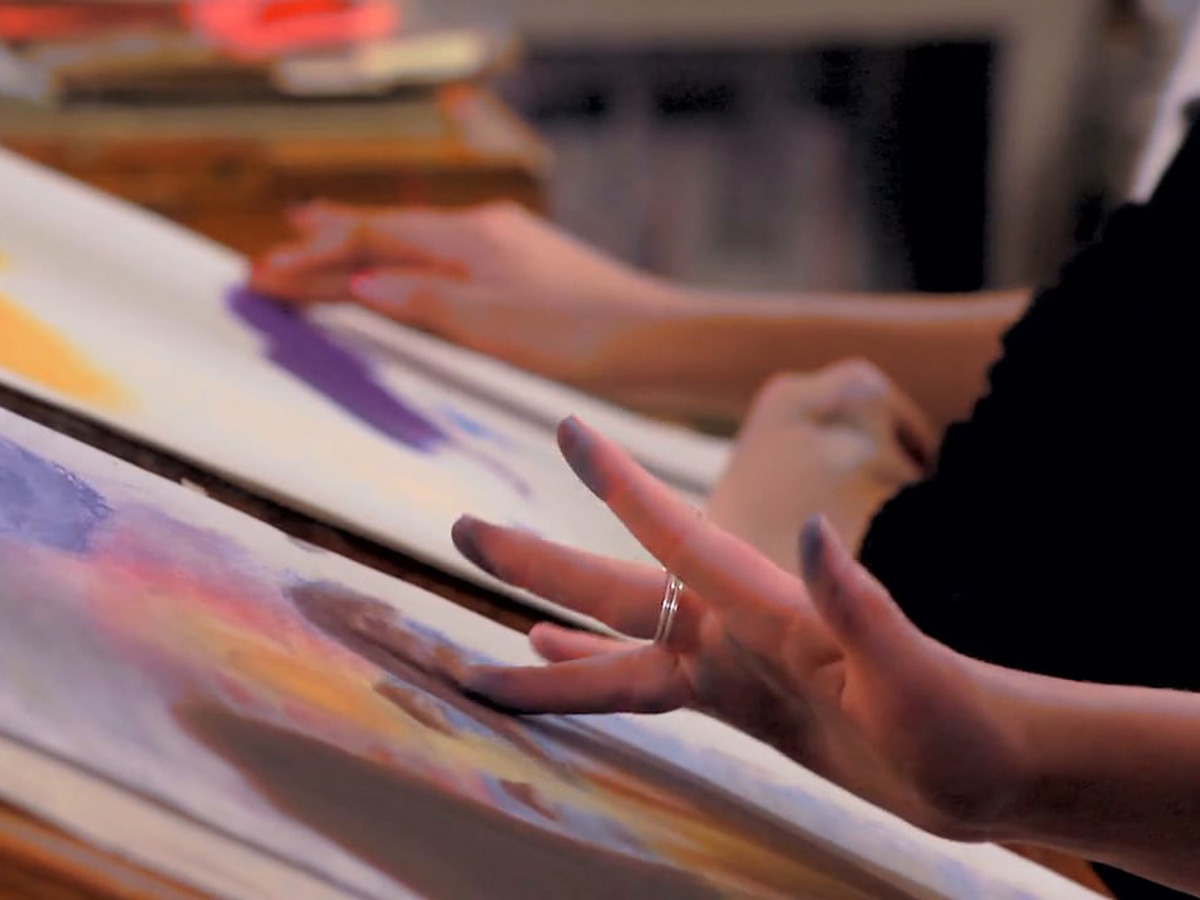 Ellie reflects on her years in a Steiner school and whether that type of teaching and freedom worked for her.

Whenever I tell people I went to a Steiner school I always get the same reaction: ‘What’s that?’

It’s difficult to write about your own education, especially when your mother was a teacher at your school, and even more so when it was a Steiner school. How do you write about something which for you was so fundamental to the gradual building of your character? Whenever I tell people I went to a Steiner school I always get the same reaction: ‘What’s that?’

And I don’t ever really know what to say on the spot, because I never really knew why it was seen as odd, or what was different about it from mainstream education. Now, after a little more growing, I do.

Steiner education ‘emphasises the role of imagination in learning, striving to integrate holistically the intellectual, practical, and artistic development of pupils’. If it sounds vague, that’s because it is. Luckily, I’m here to expand on that.

It was a summer afternoon in 2010 that I said goodbye to Steiner education forever. I’d done my GCSEs, I’d finished all of my work and I was ready and excited for the next step of my life. I walked over the school campus, which is almost entirely an homage to nature – big wood-sculpted fountains, lofty class buildings, idyllic shrubbery – to the marquee which was set up for our leaving ceremony. I smiled through the gushing speeches every teacher made about us; I sang the song we’d practised together (‘Hey Soul Sister’ by Train, which I still can’t stand) and I talked to everyone afterwards, smiling as they said all sorts of lovely things that I can’t now remember. But honestly? I just wanted to leave.

When I look back now, I think I took a lot of things about Steiner education for granted, but of course I didn’t think that then. I’d always felt as though it was the reason for my awkwardness, for my strangeness, and I resented it. Having embraced my strangeness since, I realise that there were far more positives in my alternative education than I believed there to be at the time. Teens will be teens – I just wanted to be normal, and like anyone else my age, I hated school.

The ‘imagination’ part of the Wikipedia definition is a particularly key element of Steiner education. The one obvious difference between Steiner education and mainstream education is that because the year groups are generally a lot smaller (think 10-40 students per year), the individual imaginations of the pupils can be fostered more personally. I was on a first name basis with my teachers and was encouraged to feel equal to them – through discussion in the classroom, through being invited up to write on the blackboard (yes, we used blackboards), and through a more interactive experience of the subjects. Teachers were there for guidance and help, not an authority to be feared. I remain Facebook friends with most of my class teachers to this day, and that’s never really seemed weird to me until recently.

This was a major thing that I took for granted during my time at the different Steiner schools I attended. To be ‘friends’ with my teachers was to have a closer relationship with them, and this was something I grew to reject. Criticism seemed personal, where in hindsight it was obviously an attempt to be constructive. It was easier for students to tease one another about who was the favourite and who was left out. It was also easier for students to say things that would get underneath their teacher’s skin. I don’t blame Steiner education for the cruelty children often inflict unthinkingly, however, because I believe a more personal approach to learning is how I ended up developing such a love of language and of people. I learned interpersonal skills quickly and was maxing out my own and my father’s library cards by age nine. Not every student loved words like I did, but everyone had something.

Aside from my reading, I learned how to build pizza ovens from clay and sticks.

Aside from my reading, I learned how to build pizza ovens from clay and sticks. I learned how to weave baskets from reeds. I learned about astronomy, cloud formations, art history, human relationships and natural chemistry. I learned about empathy. All these and more were taught to us through ‘main lessons’, which were niche subjects that took place during the first two hours of the morning for a certain block of time – usually a month per subject. As a test of our knowledge of the main lessons, we’d be expected to produce a ‘main lesson book’, which could be as colourful, expressive and creative as we liked as long as it contained relevant information we’d been taught. I truly believe that this kind of learning fostered a huge appreciation for art and creativity within me. My writing was encouraged in main lessons, with my main lesson feedback always celebrating my love of words. Others would be praised for their artistic flair, scientific information or orderly presentation. No child was considered to have ‘failed’; this was an exercise in self-belief and soft skills more than anything.

After the two hours of main lesson, we’d have a break before partaking in subject lessons. All the core lessons were included – Maths, English (my favourite) and Science. We also did subjects like Woodwork, which taught us to chop and carve wood; Gardening, which taught us how to tend the land, plant seeds and measure distance; and Handwork, which taught things like knitting, sewing and weaving. I still know how to sew my own clothes by hand.

We had a bodily movement for each vowel, which was supposed to strengthen our spiritual connection to sound and movement.

Then there was eurythmy. Eurythmy, as I experienced it, is essentially a performance art, wherein movement relates to the sounds that we hear in everyday life. We had a bodily movement for each vowel, which was supposed to strengthen our spiritual connection to sound and movement. As a child, I didn’t get it at all and hated eurythmy with a burning passion, but it was a good way of keeping kids active – and at the very least, I was excited to return to my desk rather than growing bored in front of it. In hindsight, I still don’t really get it, but perhaps that’s why I’m a writer instead of a dancer.

Theatre is a guaranteed part of every Steiner child’s life. School plays were obligatory, though of course shy students were allowed non-speaking roles if they wished. During my time in Steiner education I wasn’t just Ellie. I wasn’t just a student or a child. I was a Pharoah, a Greek goddess, a servant, a boy who visited different parts of the world. I was brave, beautiful, strong and servile. I was a traveller, a superhuman and a leader. As any theatre student ever will tell you, these kinds of roles encourage us to discover and cultivate new parts of ourselves.

For these reasons and many others, Steiner education has been, upon reflection, incredibly valuable to me. My class groups were diverse regarding ethnicity, gender and self-expression. I never once saw anyone hurt for that because we were actively taught not to – to appreciate difference rather than mock it. The emphasis that my education placed on children having a connection to nature is something I have fought for in my adult life and I still feel most at peace lying on a forest floor – something not even questioned on Steiner school field trips.

People can call it a ‘tree-huggers’ school all they want, and they have, but I will accept them for who they are anyway. Because that’s what I was taught to do.

Has this article helped you in any way?  Have you had an alternative education or are you thinking of one? Let us know — @rifemag

Looking for new opportunities to learn? Head to Rife Guide to find out what’s on near you As the end of term looms closer, questions about what we’re up to after summer or what our life...
Upskilling / July 15, 2015 / Yero Timi-Biu As the end of term looms closer, questions about what we’re up after summer or what our life plan...
Upskilling / June 12, 2015 / Yero Timi-Biu As the end of term looms closer, questions about what we’re up after summer or what our life plan...
Upskilling / June 26, 2015 / Yero Timi-Biu Ellie Ford-Elliott writes poetry for peace of mind and prose when there's enough coffee in the house. She's been trying to make life imitate art since 1994, exploring themes of freedom, love and intimacy in her writing so that it might manifest in reality. She's doing a pretty good job of that so far. She loves her dog, Daisy and her three cats, Fred, Villain and Piscin, and she grew up on a mountain in Ireland so considers Bristol life to be 'big city life'. She believes in female excellence in all forms and her biggest inspirations are Sara Wheeler, for the incredible account of her voyage to Antarctica, and Viola Davis, for her insurmountable acting talent. Ellie's favourite quote of all time is her friend Beth Ashton's 'Choking on change like a slot machine, worn and torn like doctor waiting room magazines'. How Poetry Saved My Life Top Tips If You Are Moving Out From Your Parents