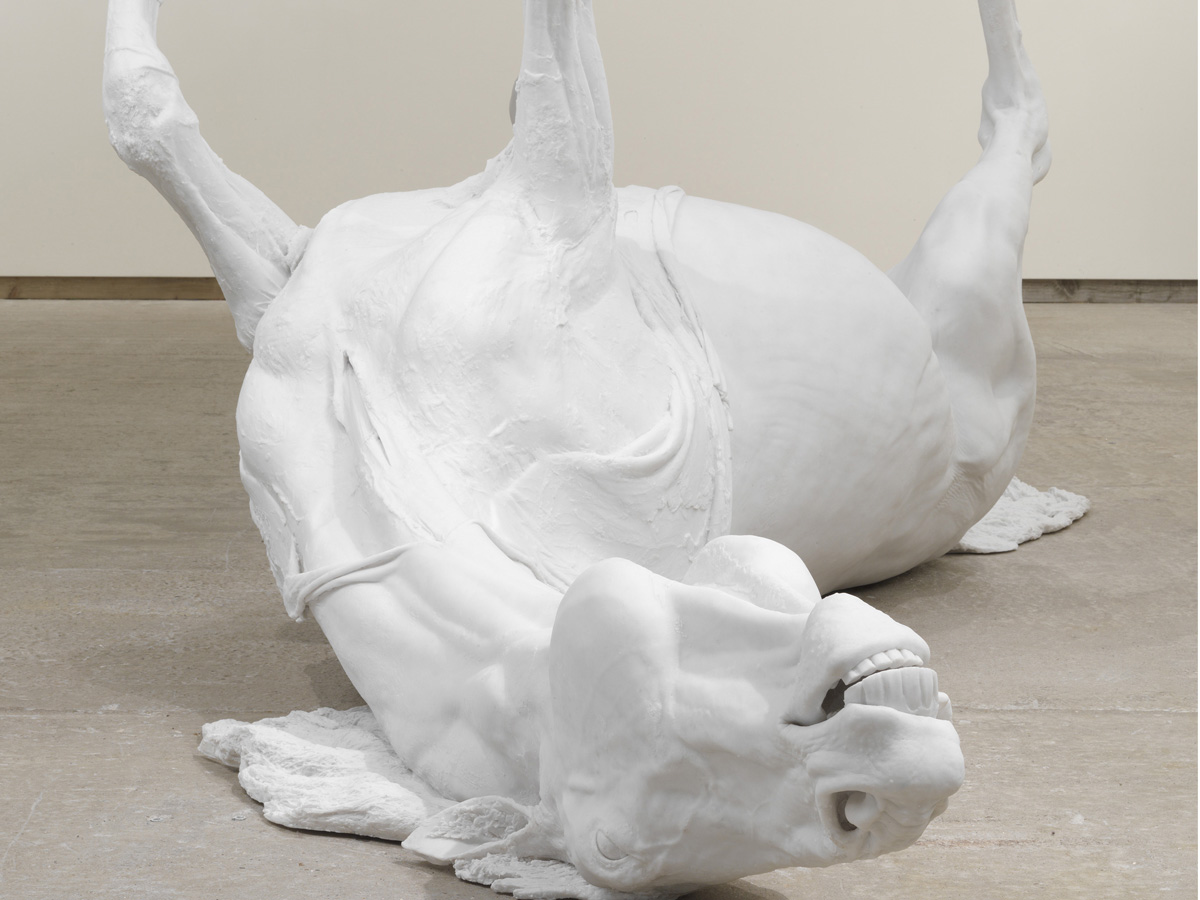 Courtesy of the artist

Tom heads to the new Daphne Wright exhibition to explore our relationship with animals.

Emotional Archaeology brings together the work of Irish artist Daphne Wright for her largest solo exhibition to date, work is displayed across two locations both at the Arnolfini and Tyntesfield National Trust property. The show displays a variety of techniques to create work that covers themes of faith, parenthood, class, but most prominent in the exhibition are her depiction of dead animals. Wright has developed an intricate casting process that gives the sculptures extreme detail, every hair and feather is frozen in place on the dead bodies of these animals which silently morn as martyrs for the species. The largest of these works is Stallion, a cask of a full-sized horse laying on its back, caught writhing in pain, his side cut open and skin partially flayed. Wrights casting method captures every detail of the fallen animal freezing the scene before the skinning and butchering can continue. The use of marble dust adds to the metaphor of the piece, the horse which is a symbol of power to be found atop plinths and monuments is here upturned eviscerated creating connotations of a dismantled dystopian society.

These sculptures act as memorial of the disconnection between humans and animals since the industrial revolution, before the internal combustion engine made much of our relationships with them obsolete we relied on them directly for everything, food, clothing, travel, labour and much more. Until the 19th Century, animals were at the centre of human existence, an influence which is spread across the religion and art of all societies. A once mutual dependency has become an abusive relationship of excessive consumption where animals are thought of as material commodities. Much of the shock of Wrights casts comes from this disconnection; we are reminded of the size and dimension of these animals, which were commonplace before the industrial revolution. Animals were pushed out of the cities by cars and trains adding to the strange loneliness of the metropolises, John Berger writes ‘animals offer man a companionship which is different from any offered by human exchange. Different because it is a companionship offered to the loneliness of man as a species’. Here at the exhibition we are comforted by the deaths of these animals and asked at least to acknowledge their passing.

The bull memorialises the generations of livestock that were raised in the surrounding area.

At Tyntesfield, Wright memorialises the cattle which can be seen in the grounds of the house. Laying the death-mask of a great bull in the centre of one of the stately rooms, accompanied by two stillborn lambs. The bull is overlooked by portraits of other cows representing his family and mimicking the family portraits hung around the Tyntefield stately home. The bull memorialises the generations of livestock that were raised in the surrounding area. In the context of Tyntefield both the Death Mask and Stallion could be seen to represent the dying myth of strong patriarchal masculinity, these male symbols of strength now lay dead, as does William Gibbs the Victorian businessman who built much of the estate. This sentiment is reiterated by the donor of the horse used to cast stallion, an elderly man dying of cancer forced to sell is farm and horses. After viewing the sculpture he remarked, ‘that’s me’. This theme plays to the demographic of the national trust property but makes me feel slightly uneasy, with my new found appreciation for animals I am unsure whether the wealthy owners of estates deserve the comparison, this shows how the location of art can affect its connotations.

Can check out this exhibit of illustrated women in history PHOTO ESSAY: Views From The Sticks

Barker heads back to his small town on the edge of Bristol to remind himself how beautiful our surrounding countryside...
Art / January 19, 2017 / Barker A Street Art Crawl Through Bristol

Jazz compiles some of Bristol's most quirky, creative, and influential pieces of street art you can find by foot, in...
Art / August 10, 2016 / Jasmine Thompson Jazz illustrates a silly comic series based on the type of students you’re likely to meet when you go...
Art / September 9, 2016 / Jasmine Thompson

Tom Verity is an artist.