On Cries For Help, Attention Seeking, Self-harm And Attempted Suicide 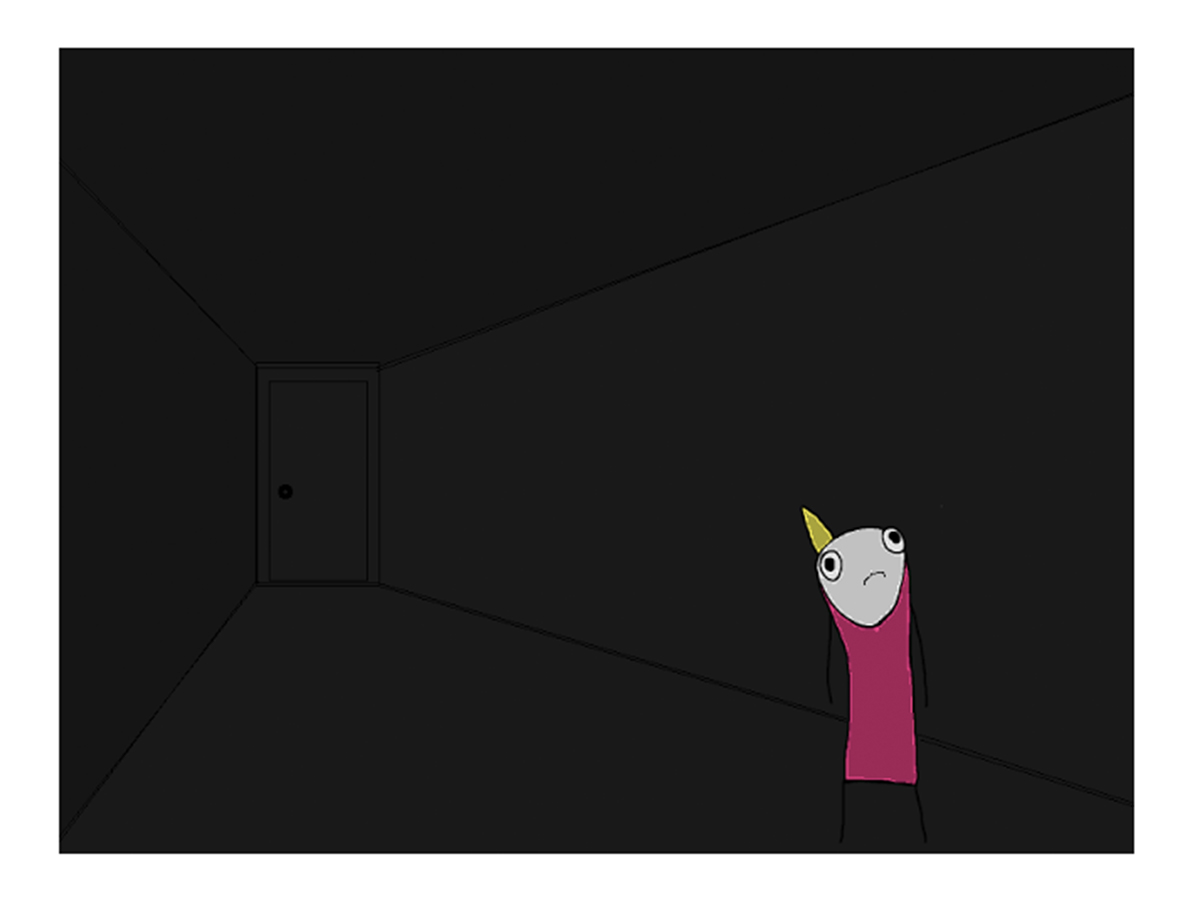 From the very brilliant comic ‘Adventures in Depression Part 2‘  by Allie, which I use regularly to explain depression to loved ones.

Ailsa addresses the issues around dismissing self-injurious behaviour as a ‘cry for help’. This is a frank piece involving discussion of self-harm and suicide. Please think about yourself before you read it. Take care.

When I was 12, the topic of self-harm came up in an English lesson. My teacher at the time asked the class why we thought people might self-harm. She allowed only a moment for the ensuing silence to hang in the air before dropping ‘to get attention’ into it, heavy with her scathing tone.

I’m sure you’ve come across it before: that same scathing tone and eye roll looking everywhere but the issue at hand accompanying the utterance of ‘attention seeking’.

I’m sure you’ve come across it before: that same scathing tone and eye roll looking everywhere but the issue at hand accompanying the utterance of ‘attention seeking’. Along with the term ‘cry for help’, ‘attention seeking’ is often used by folks as a supposedly obvious way in which to sideline self-injurious behaviour, whether that’s self-harm, attempted suicide or other actions. With another smirk, the speaker will move on, confident that the topic has been dealt with adequately. It hasn’t. It barely ever is.

Though many use self-injurious behaviour in order to cope with depression, overwhelming feelings and/or more destructive urges, it can also be a way of trying to gain attention. The crucial point being this is not an inherently bad thing. We are, however, socialised from a young age to believe it is so here are some points deconstructing that myth.

Though conversations around mental health issues have opened up a lot over the past few years there is still a lot of stigma and shame around the topic. The focus of conversation has also predominantly been on anxiety and depression, centring white people, and still hard to access for men. This focus means that what are often viewed as more complex and ‘scarier’ mental health issues (such as borderline personality disorder, bipolar disorder and schizophrenia) are sidelined, along with conversations with and about ethnic minority groups and men. As a result there are still many people suffering who either don’t know it, have normalised it, or do not have the language and/or means to reach out for help. Often in these situations, whether consciously or unconsciously, it can seem like the only option left is to express mental pain in a physical form.

Though my past self-harming was most often purely a way to express feelings that I had no words for, it was also a –albeit only fleetingly exposed– signal to those close to me that I was not coping. That I needed someone to reach out to me because I didn’t know how to reach out to them. That was never my fault despite blaming myself for years. If someone doesn’t have the language and channels they need to reach out, please don’t blame them for just trying to cope.

Linked closely to #1 is the pervasive double standard between how we treat physical and mental pain. If someone breaks an arm, they will get sympathy, people will offer help. When the pain is internal and invisible a lot of people’s immediate response is to dismiss it, particularly if they don’t understand it. There are many reasons for it. Though the mortality rates for many mental illnesses are very high, many still do not understand the serious impact of them. Perhaps this is partly due to the stigma around suicide. When a person kills themself most people will phrase their death that way, if they acknowledge suicide at all. Very rarely do you hear someone attribute a death by suicide to their mental illness. The fact is, sadly, that many die because of mental illnesses and many, many more suffer because of them.

If someone does manage to speak out about suffering from mental health issues, try and take them at their word. If you can’t understand it (which is, in itself, very understandable) try doing some research. There is a rich world of resources on the internet now ranging from clinical lists of symptoms to much more personal accounts of living with various mental illnesses. The most important thing is to do your best to believe someone. Asking for help is a terrifying thing to do and making yourself that vulnerable by admitting you’re struggling is a brave act in and of itself. Respect that. 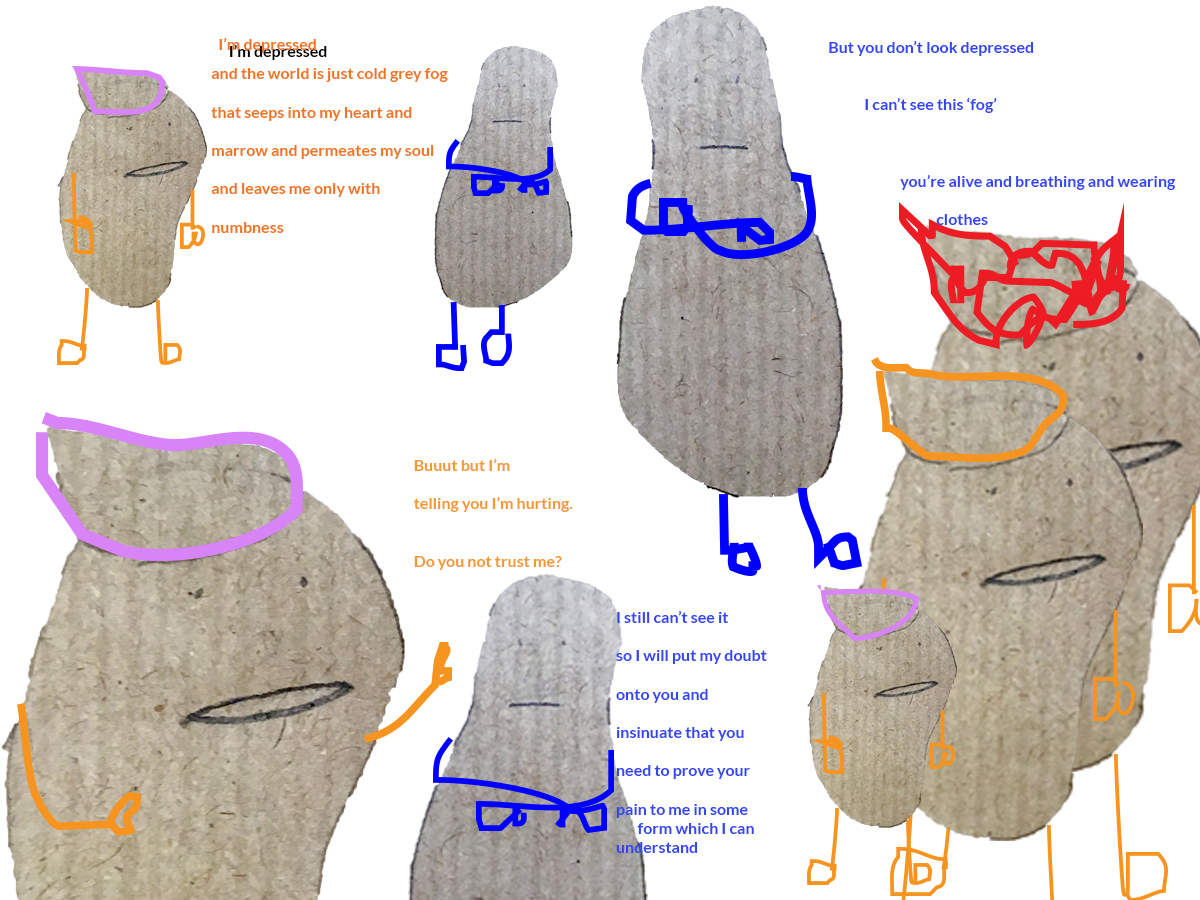 This one I drawed myself. Ailsa Fineron, age 23.

Already scarce mental health services have been cut in the UK recently and are facing more cuts in the future. There have been deaths due to not having enough beds in psychiatric hospitals and many are struggling to cope whilst waiting for months or even years for treatment. Due to a lack of resources, services are forced to prioritise patients by how unwell they are. In short, the greater they deem the risk to your life, the faster you get treatment. There are various issues with this. The first being that the tools we have for determining someone’s risk to themselves are extremely crude. The second is that the scarcity of help can lead people to getting sicker in the meantime or even exacerbate the symptoms of someone’s illness. I was told by a psychiatrist last year that if I had ended up in hospital due to being hypomanic and/or depressed then I would have got a diagnosis and help quicker. When I then asked her if I should have not resisted the urges that come with my moods in order to be hospitalised and get this help she told me off for being angry, denying that I needed to have put myself in danger to get seen quicker and directly contradicting herself in the process. If we had the resources we need incidences like this wouldn’t happen. People would be given the treatment they deserve as soon as possible. Ideally before even getting to the stage where physical harm is possible. 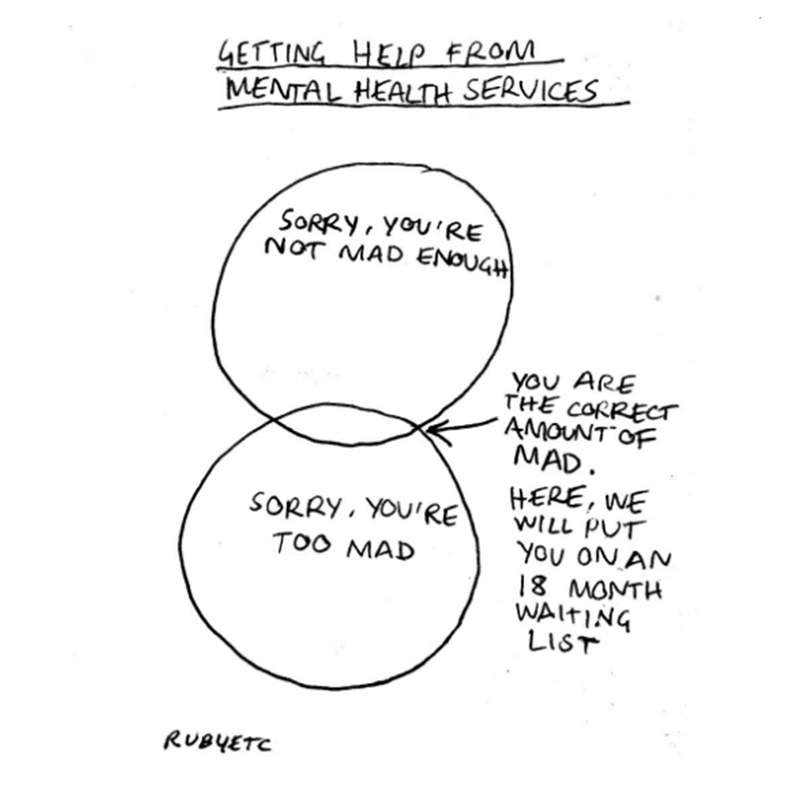 This is summed up beautifully by this venn diagram from Ruby etc who is an illustrator whose illustrations have got me through a lot. Check her work out!

If you are struggling, please know that you deserve kindness, help and support. You do not need to be a risk to yourself in order to deserve kindness, treatment and a rest. No one should feel that they have to put up with many of the horrible symptoms that come with mental health issues. Please try to look after yourself but know that self-harming is not something to be ashamed of. If you are struggling to talk to the people around you, try calling the Samaritans, MindLine or going to a local peer support group. And if someone dismisses your asking for help –whether it be through words or actions– as a ‘cry for help’ or ‘attention seeking’ please know that you absolutely deserve attention and help and there is nothing wrong with indicating that you are in need.

If you have ever dismissed someone’s call for help, in any form, please take some time to read or watch a video on what it’s like to be suffering from a mental illness. Take the time to ask what you can do to help those in your life and take more time to listen to their response. Though NHS services are low on resources at the moment, it is still worth getting someone in touch with their GP and there are many charities doing great work. It’s also amazing what difference a supportive friend can make. I will end this article with a plea to recognise that self-injurious behaviour is a symptom of a greater problem and pain. Please treat it as such.

If you or a loved one are struggling you can get help, support and advice from these organisations. Off the Record has also just opened Inspiration Works which will be hosting free sessions on grief, self-harm and numerous other issues. Check out what they have to offer. Self Care On A Budget For Those Who Can't Buy Happiness

Ailsa gives us all some tips for looking after yourself when you don't have the luxury of buying happiness.
Fun Stuff/Lists / June 8, 2016 / Ailsa Fineron Ailsa is a 22 year old photographer, writer, poet and coffee drinker (double black americanos for future reference). Originally from Scotland, she moved to Bristol in 2011 and has been here ever since. In addition to being a Content Creator at Rife, she is a resident photographer at gal-dem.com: an online publication created entirely by women of colour but for everyone in order to broad the range of voices and stories in media. Ailsa is also an outspoken mental health advocate, and deeply enjoys discussions around how mental health issues, gender, sexuality and race all intersect and what we can do to improve life, the universe and everything. As well as writing, filming and photography, Ailsa loves dancing, singing, listening to songs obsessively, being an enthusiastic jumping bean, making the personal political, cycling, smiling and cooking awesome vegan food.

Self Care On A Budget For Those Who Can't Buy Happiness

Ailsa gives us all some tips for looking after yourself when you don't have the luxury of buying happiness.
Fun Stuff/Lists / June 8, 2016 / Ailsa Fineron Should I Stay Or Should I Go?: On The EU Referendum This exam season, Ailsa gives you some tunes to get up from your desk and get down to.
Music / May 16, 2016 / Ailsa Fineron
<PreviousNext>