The Best Vegan Pizzas In Bristol 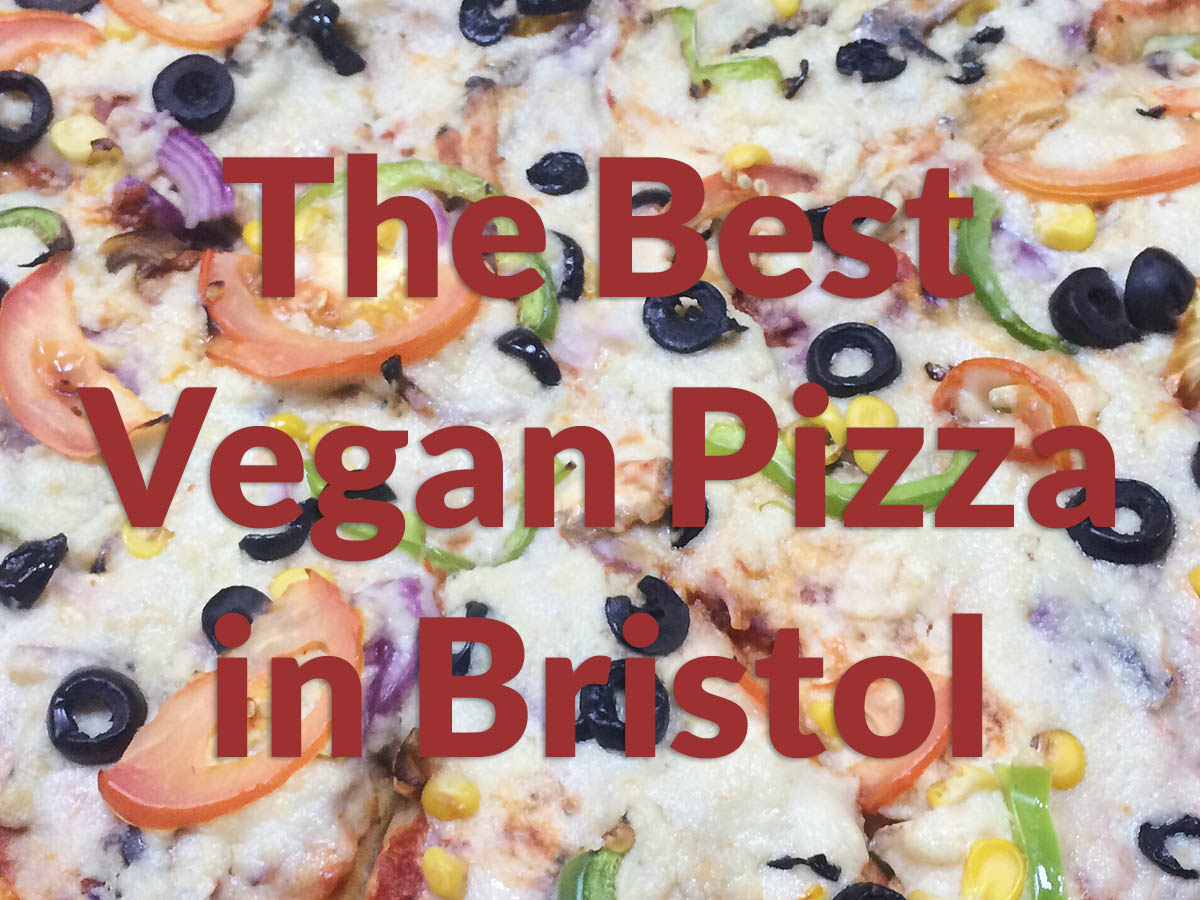 Leo heads out into Bristol looking for its best vegan pizza. Wanna know who has the best? Read on and find out.

The city is surprisingly accommodating for pizza-loving Bristolians.

Want to hear a joke about pizza? Never mind, it will be too cheesy (buh dum tss). But seriously, although most people will sneer at the idea of pizza without warm, stringy mozzarella cheese there are some great pizza alternatives for those who don’t eat dairy or animal products, like vegans.

Veganism may seem like a ridiculous fad adopted by animal-lovers who enjoy making themselves miserable (I mean, who voluntarily gives up milk chocolate?) but there’s a lot more to it than that. With livestock production being estimated as causing nearly 15% of the world’s human-caused greenhouse gas emissions, going vegan doesn’t just save the animals, it saves the world too. In fact, campaigns such as meat-free Mondays suggest that cutting meat out of your diet for just one day a week will help reduce your carbon footprint. Which all sounds pretty great, right?

But what do you do about those dairy, meaty comfort foods that just can’t be replicated with plant-based alternatives? What’s a vegan to do when all they want is a nice warm pizza to tuck in to? Not to fear, the city is surprisingly accommodating for pizza-loving Bristolians. I’ve scoured the streets and tried to compile a list of the best vegan pizzas available in Bristol. I’ve analysed them in a very scientific way: rating them out of five for three things: base, toppings and cheese. 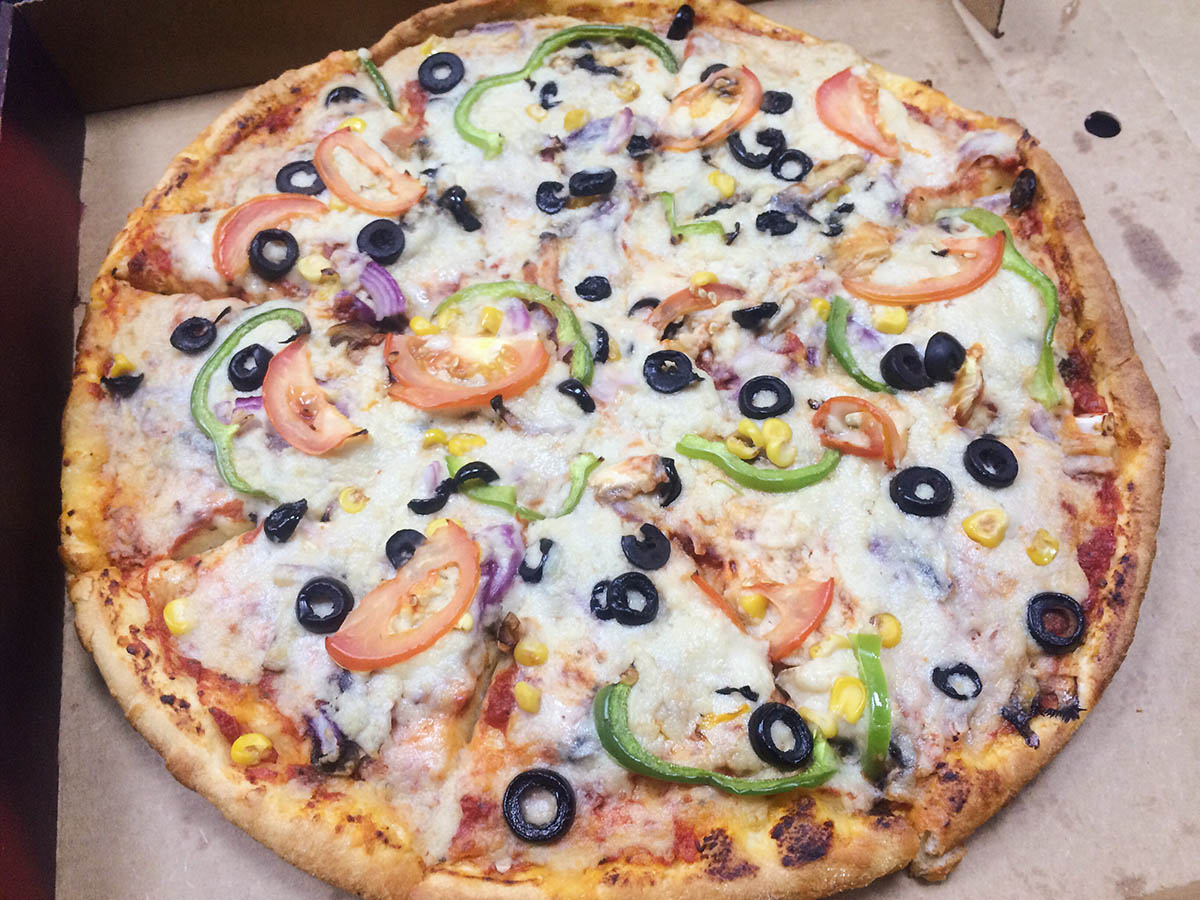 Big Bite is a takeaway that is, at first glance, not the place for meat-haters. The menu consists of standard kebab shop fare: kebabs, burgers and fried chicken… did we mention kebabs? However, Big Bite does offer vegan versions of their pizza and will deliver until the early hours of the morning if you ever get late night cravings. I got a standard vegetarian topping that came with all the typical things vegetarian pizzas are usually topped with: olives, pepper, red onions, mushroom and sweetcorn.

Base: This probably had the thickest base out of all the pizzas I tried but it was nicely cooked and wasn’t too doughy. It did get a little chewy after it had cooled down though. 4/5

Toppings: The classic vegetarian pizza toppings are classics because they work. It would have been nice to have a bigger veggie variety though. 4/5

Cheese: Unfortunately, Big Bite do charge extra for vegan cheese, which kind of makes sense when looking at how much they use. The tomato-to-cheese ratio was way off with much more cheese than tomato. It had quite a pungent flavour but it wasn’t the worst fake cheese I’ve ever tasted, and Rife’s resident meat-eater Jack said it was far better than he’d expected. 3/5

Overall: Good pizza, if a little heavy on the cheese. 4/5 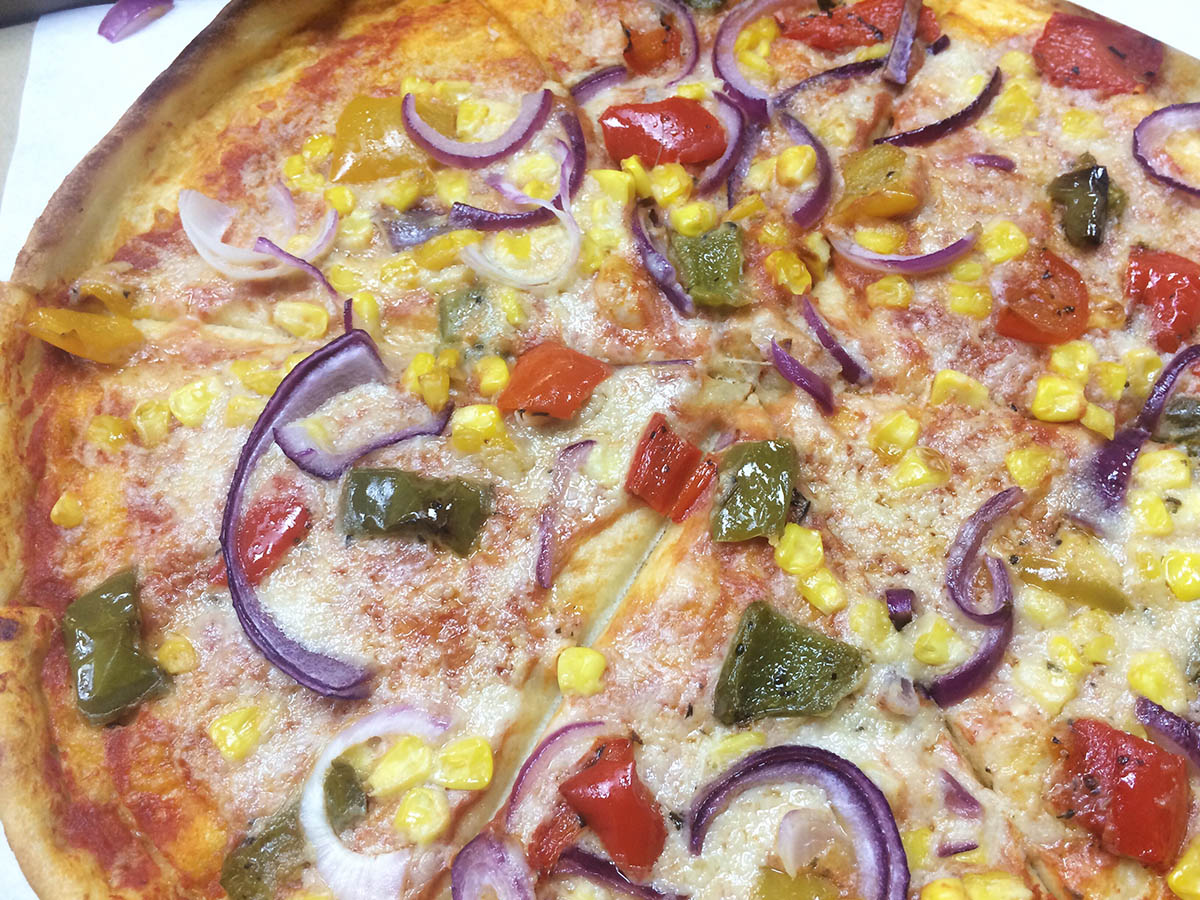 Planet Pizza has two branches in Bristol, one on Gloucester Road and another on Cotham Hill. All of their pizzas are named after things in space, such as the Meteorite pizza with meatballs, and the Saturn pizza with sausage. The vegan pizza is less excitedly named Plan-it Vegan (get it, planet vegan) and you pick your own toppings. Unfortunately there weren’t very many vegan options so I opted for the rather uninspiring sweetcorn, pepper and red onion.

Base: The base was thin and crusty. It had a satisfying pizza-sounding crunch. It also tasted a bit like paper. You win some, you lose some, I guess. 2/5

Toppings: There were only five vegetarian options, and the only two I didn’t have were sun-dried tomato and olives. The pizza was fine, but getting me to choose my own toppings felt very much like having to choose my own advert when watching a show online. I don’t really care, and you’re still going to sell me more-or-less the same thing whatever I choose. Why not just recreate a new pizza, give it a proper planet name, and chuck on all the toppings in one, eh? 3/5

Cheese: There wasn’t much cheese on this pizza but there was just enough to give the illusion that I was still eating a cheese-covered pizza. As I could barely taste the vegan cheese I couldn’t taste anything bad about it. 4/5 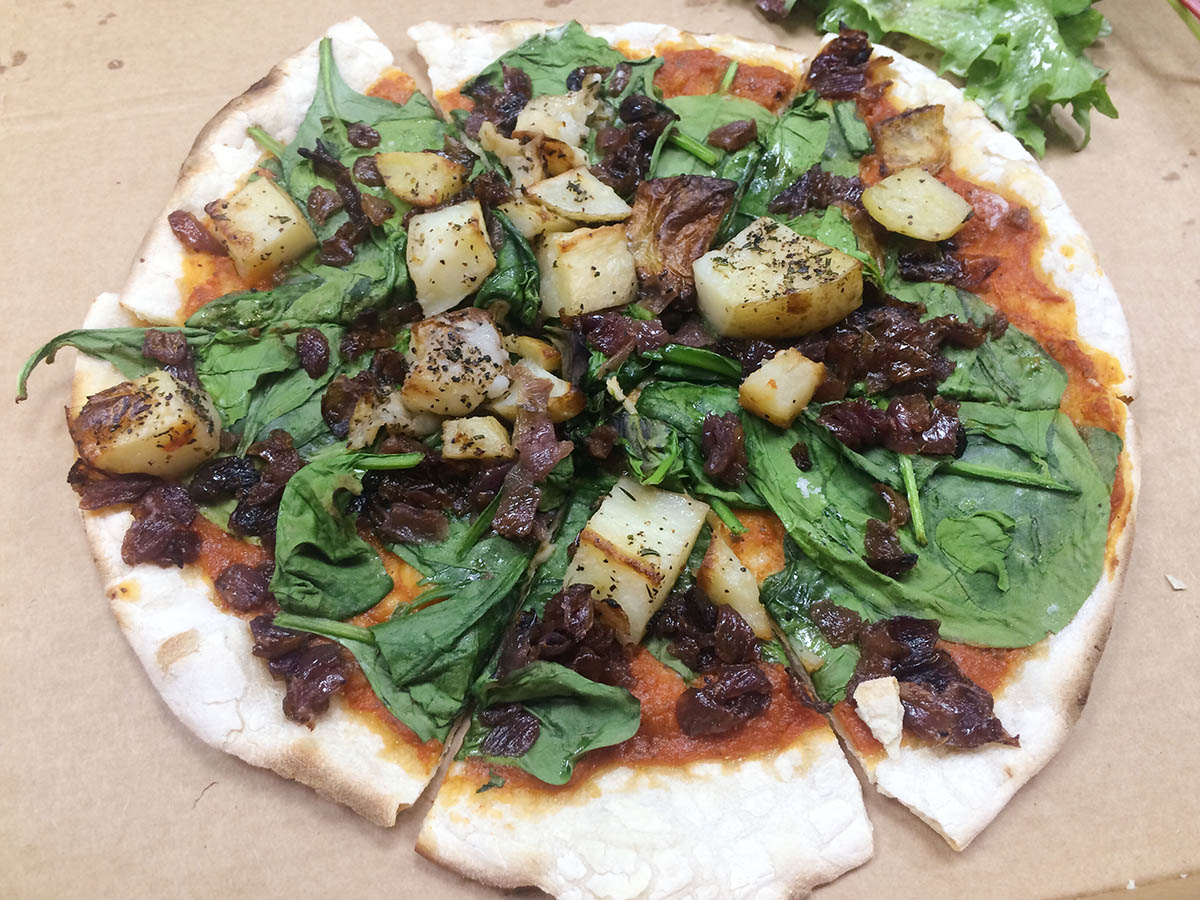 Pizza specialists The Stable pride themselves on their British pizza toppings and local suppliers. Their sourdough pizza bases are vegan and their pizzas come without meat or cheese upon request. I chose the rather fancy toppings of herb-roasted potato, Spanish onions, English spinach and a side of rocket salad.

Base: The base was good and a little different because it was sourdough, but I love sourdough. If you aren’t a fan of thin or crispy crusts then it’s not the pizza for you. 5/5

Toppings: Potato on a pizza? Alright, then. The toppings were definitely odd for a pizza, but I found it surprisingly tasty. I like trying new things so the break from the norm was appreciated. I still need to be convinced that spinach works on pizza, though. 4/5

Cheese: Okay, so look, their vegan option doesn’t replace the cheese with a vegan alternative. It was pizza sans cheese. It was a bit of sourdough bread with some tomato and potato on top. I’m not sure you could call it a pizza at all, actually. N/A

Overall: It might not technically have been a pizza, but it was still incredibly tasty and vegan-friendly. 3/5 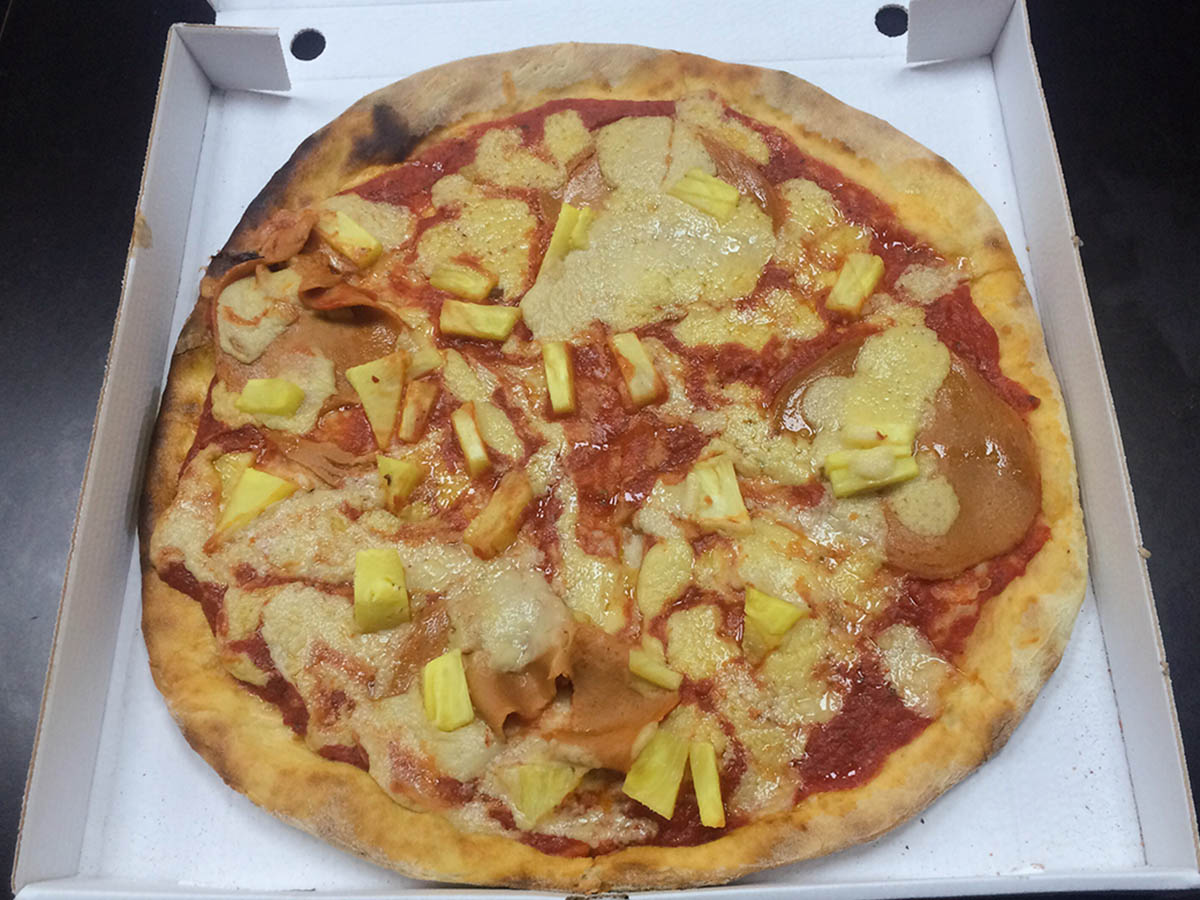 With its bright green shop front, everything about Pepe Nero on Bond Street screams healthy eating. It proudly advertises that it provides meat, veggie and vegan options for food, and they don’t skimp out on options. With a specific menu of only vegan pizzas, the toppings at Pepe Nero were by far the most exciting. As well as fake cheese they also provide fake meat options, such as sage and marjoram vegan sausages and vegan bacon. For those who aren’t into faking their meat, they also had tofu as a protein-filled topping. I settled on a classic topic: the Hawaiian. Pineapple and cheatin’ ham.

Toppings: Ham and pineapple has and alway will be my favourite pizza topping, which was heartbreaking when I stopped eating meat. Pepe Nero’s vegan version of the topping was actually pretty good. Full disclosure, the vegan ham doesn’t actually taste anything like ham, but it still tasted excellently tasty. I’m drooling just thinking about it. 5/5

Cheese: The tomato-to-cheese ratio was perfect on this pizza. There wasn’t so much cheese that I was thinking about how much it didn’t taste like real cheese but there was enough to still give the pizza some flavour. 4/5

Overall: Even the staunchest of meat-eaters would be won over by a Pepe Nero vegan Hawaiian. Who needs the real thing when Pepe Nero exists? 5/5

While vegan cheese will never truly be able to convince my taste buds it’s real cheese, and while a pizza without the real thing might not seem appealing, these four places give a pretty good go at creating an alternative. And if none of them float your boat, you can always pop into a supermarket and buy a vegan pizza base and create your own vegan pizza. My favourite DIY vegan pizza topping is hummus, baked beans and salt and vinegar crisps. Honestly, don’t knock it until you’ve tried it.

For more vegan pizza places in Bristol, check out veganbristol.com Ten Meals for a Fiver (Food) Gloucester Road resident Lily thinks it's the best place in the world, and the bee's knees for shoppings sprees.
Lifestyle / July 31, 2015 / Lily Baron How To Make Your Own Make-Up

After realising how limited the foundation options for dark skin tones are, Leo decided to try making her own cosmetic...
Lifestyle / June 26, 2015 / Varaidzo The Afro Chronicles: Volume One

A comic in which Leo chronicles what it's like having an Afro.
Lifestyle / July 24, 2015 / Varaidzo
<PreviousNext>