Next up in Molly’s round up of the best young bands Bristol has to offer is Carnaby. Exploring a range of genres from psychedelic to art rock, they’re a new alternative indie band on Bristol’s music scene.

These guys are good. Usually an unknown band will play to an empty room but Carnaby can even make the walls dance with their indie-delic sound. That’s how good they are. Take a listen to this 90 second song:

Nice, right? Formed just over a year ago, the band of four have been busy writing, recording and performing originals.

If you like short, vibrant indie songs then Carnaby are the band for you to jam out to.

‘It’s time for a new music scene/wave of music’

Listening to The Beatles and the story of Lennon and McCartney inspired Scott to start the band and write his own songs because he felt he could do it.

Although Scott prefers writing, practising and recording music because he feels the connection of the music to an individual can be lost through live performance, Carnaby puts on a fluid show. Scott sees different music scenes in Bristol through his varied tastes and says he thinks ‘it’s time for a new music scene/wave of music’, which he’d like to be part of. 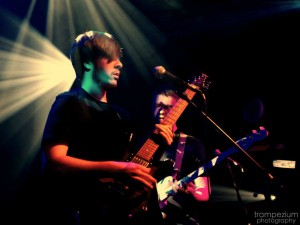 When asked about the future for the band, Scott replied, ‘I’d like the band to be successful but retain 100% artistic control and integrity. I also think it will need to keep evolving musically to survive.’

Scott’s advice to other musicians in Bristol is ‘write your own songs, make the music different or unique in some way and make sure there’s artistic integrity’. It’s a new year for Carnaby, so we should expect to see them all over Bristol’s many venues as well as the promise of some new releases.

Like Carnaby? Check out their SoundCloud and  Facebook page to find out more about the band and let us know what you think @rifemag Ninety One Minutes of Freshness

With the impending screenings of 'Fresh Dressed' at the Watershed, Antonia explores what it meant to be 'fresh' through the...
Music / October 29, 2015 / Antonia Odunlami Playlist: Songs by Sassy Girls to Get you out of the Door in the Morning

Sammy has to have at least one of these bangers playing in the morning if she's ever going to struggle...
Music / October 29, 2014 / Sammy Jones Bowie, Grief And The Internet

Following the death of musician and actor David Bowie, Grace explores how we deal with the death of celebrities in...
Music / January 15, 2016 / Grace Shutti Meet The Dogs Of Bristol

Molly went out into Bristol to capture its dogs (on film), find out what they get up to and what...
Bristol / February 26, 2015 / Molly Perryman Molly has been attending a lot of networking events recently and is now an expert at the meet'n'greet.
Upskilling / January 28, 2015 / Molly Perryman RECAP: Dan Higginson's How To Get Your Film Company Rolling

Dan Higginson from Clockwise Media told us some tips on how to set up a successful production company.
Upskilling / February 18, 2015 / Molly Perryman
<PreviousNext>