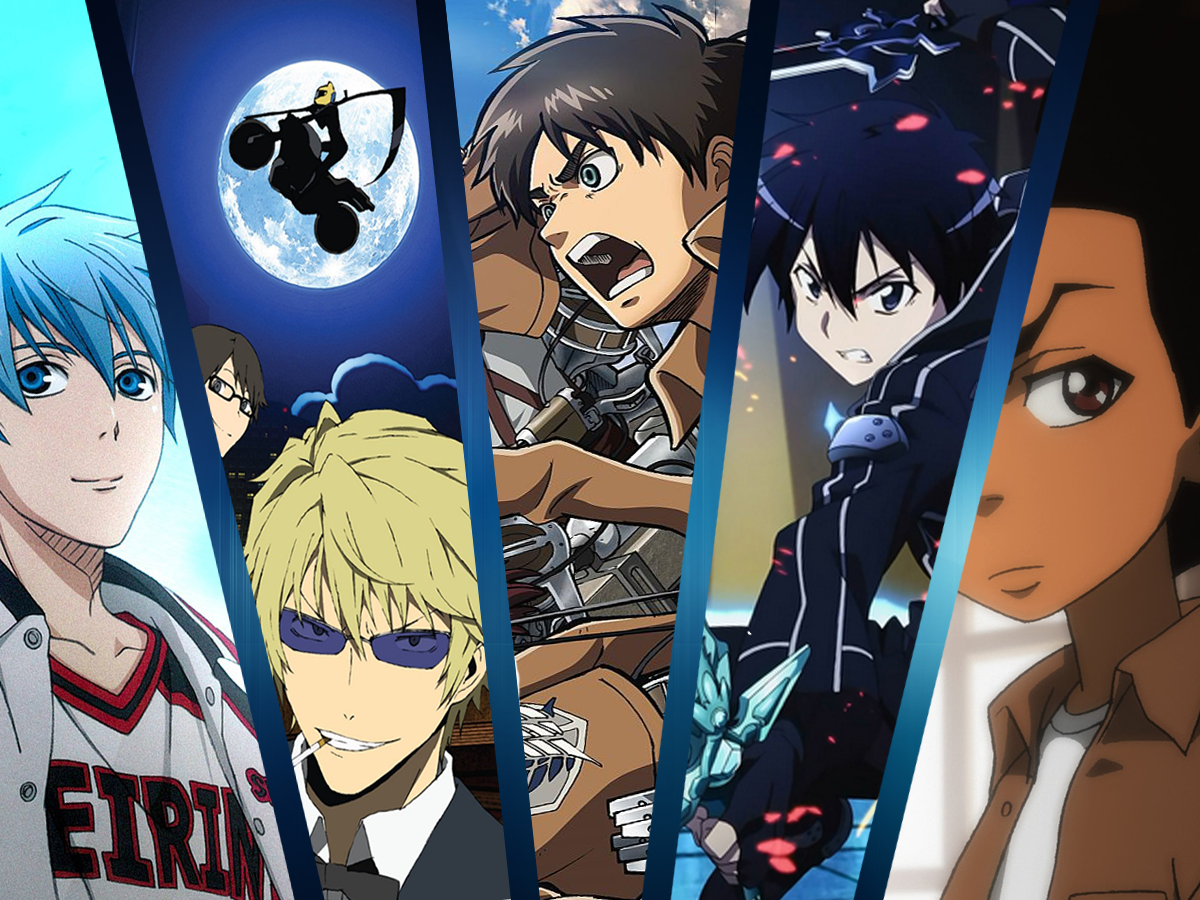 Anime head Luke Newman lets you know what you should be watching, and why. 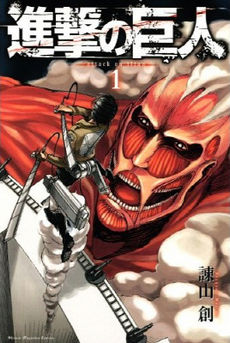 In ‘Shingenki no Kyojin’ it’s the year 850 and humanity faces a great threat, Titans. Titans are large humanoid organisms with no intelligence. They may look like humans but they have no emotion. They have no reproductive organs and no digestive system, they can live for years without food, but they have an appetite for one thing…can you guess what that is? Yes. Humans. After being forced to the very limit, humanity is desperate for survival; so in their final attempt to survive, they build Wall Maria.  Wall Maria covers their safe lands to protect the remaining public. Within Wall Maria, there are two inner walls: Wall Rose and Wall Sina. In each wall there is a social class, upper class being closer to the king who is safer and lower class being on the outskirts, who are more vulnerable to attack.

Eren Jäger: The story follows Eren as he grows up training to become a Titan hunter with the survey corps.  His actions are determined by the death of his mother who was eaten by a ‘Smiling’ Titan. He vows never to quit until the Titans are no more.

Mikasa Ackerman: Mikasa is a strong female protagonist. She is also the childhood friend of Eren. Mikasa has sworn to be with Eren in whatever he does, so when Eren decides to take vengeance upon the Titan threat and join the military, Mikasa joins willingly even though she doesn’t support his actions.

Armin Arlert: Armin is the weakest in the childhood trio, he follows Mikasa and Eren blindly doing whatever they do. Although Armin is weak, he’s a quick thinker, during the show Armin proves his worth by coming up with solutions in the darkest hours proving that it’s not all about the brawn to be a worthy member of the survey corps. 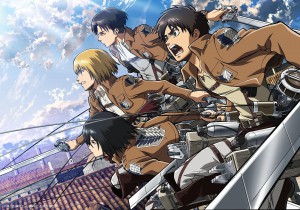 The show is currently in production on its second season. Season one is finished with 25 episodes, 3 OVA’s and nine bonus episodes. Season 1 will be getting an English dub in the winter.

‘Attack on Titan’ shows the hardships the characters face in each episode, with flashbacks and character development.  It contains plenty of twists to keep it fresh and suspenseful. It won’t take long for you to be immersed in this apocalyptic fantasy. 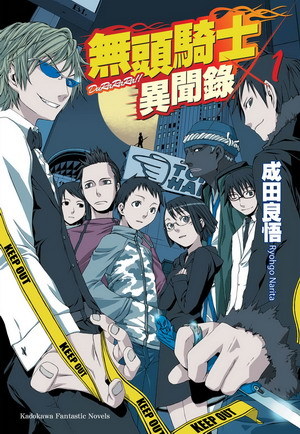 ‘Durarara!!’ (デュラララ!!) or ‘DRRR!!’ is also based of a novel series of the same name written by Ryohgo Narita and illustrated by Suzuhito Yasuda.

‘Durarara!!’ takes place in Ikebukuro where rumour has spread about a new gang in town. Ikebukuro is already known for owning two fierce gangs: The Blue Squares and The Yellow Scarves. The Dollars, an unknown group, have said to be taking over in the Ikebukuro district and people say they don’t even sport a colour…  Since rumour spread The Blue Scarves went quiet and police activity has been vigorous, but that’s not all. Rumours also say that the headless rider roams around the streets on a jet black motorcycle attacking mobsters and gangbangers. Some say the rider is part of the colourless Dollars and that there’s more than one rider. With all of the rumours of invisible gangs and headless riders in the city, it is causing a commotion. The anime follows the lives of 14 different people through their lives in Ikebukuro.

Ryuugamine, Mikado: is one of the first story arcs in this anime. 15-year-old Mikado has just moved to Ikebukuro to go to Raira Academy and to live an exciting life. Led by stories told from his friend, Kida, he moves to Ikebukuro to experience first-hand, the madness that goes on.

Kida, Masaomi: Kida is a bit of a player…Well at least he likes to think so, he can’t resist the ladies but…they can resist him. Kida is Mikado’s childhood friend, he has been there online since Mikado got his first computer, spending most of their time in chat rooms. He encourages Mikado to move to Ikebukuro. Before Mikado moved, Kida was lonely and depressed because of the kidnaping and torturing of his girlfriend when she got involved with The Blue Squares and Yellow Scarves beef.

Heiwajima, Shizuo: From a young age Shizuo showed incredible strength when his brother stole his pudding one day. After finding out his sweet treat was in his brothers digestive track, he picked up his own refrigerator in blind rage, his body couldn’t handle it so he ended up being hospitalised time after time. Shizuo has used his anger on those who deserve it and over time his body has developed to where he now has no physical limitations.

‘Durarara!!’ is 25 episodes long and is rumoured to have a second series in the year 2015.

It shows the story of 14 characters based in Ikebukuro and how the gangs effect their lives. It shows each characters personal background and how they ended up or came to Ikebukuro 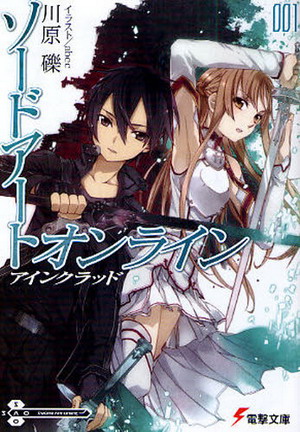 ‘Sword Art Online’ (ソードアート・オンライン ‘Sōdo Āto Onrain’) is based on a light novel of the same name written by Reki Kawahara and Abec.

‘Sword Art Online’ takes place not far from present day and VR (virtual reality) has improved significantly with the release of the NerveGear. At the peak of VR technology Kayaba Akihiko creates Sword Art Online, an advanced VRMMORPG (Virtual reality Massively Multiplayer Online Role Playing Game). The game became popular throughout Japan and Millions of people now sign in: school kids, bartenders, teachers… you name it. Once players join Sword Art Online they’re greeted by Kyaba Akihiko in his ‘GameMaster’ form. Kayaba then tells his customers that they’re trapped within the game and the only way out is to clear all 100 floors of the challenge tower… Before he returns he mentions another thing. If you are to die in the game the NerveGear disables your brain with shockwaves… killing you in real life.

Kirito: 14-year-old Kirito, the main protagonist, is a school boy/avid gamer. Kirito is also trapped in the game world with millions of other people, but Kirito is not a novice when it comes to VR games or sword play. Kirito is a beta tester and was in Sword Art Online during the Beta phase of development. With the convenience of him and his sister being Kendo students, Kirito manages to get by with his skills and his ability to never call quits.

Asuna: 15-year-old Asuna, the heroine, attends a different school in Tokyo. Kirito and her meet during the Boss fight on the first floor of the Game’s tower. Realising how dangerous the SAO world is Kirito takes the blame for being a beta tester and parts from the group. Shortly after his departure Asuna becomes a member of Knights of the Blood, a popular guild in the Sword Art Online universe.

The show is currently in production on its second season titled ‘Gun Gale Online’. Season one is finished with 25 episodes, a feature length special and nine bonus episodes titled “Sword Art Offline”. 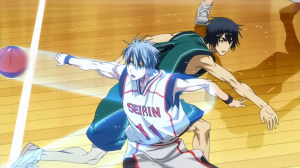 The story follows the Seirin High school Basketball team as they strive towards their dream of winning the winter cup national in Japan. During their journey Kuroko has to deal with his former team mates ‘The Generation of Miracles’. ‘The Generation of Miracles’ is the team of Teiko Junior High. They were legends and went on to win Junior high school nationals for 3 consecutive years. After graduation the members were sent off to different schools. The members consist of Akashi, Murasakibara, Aomine, Kise and Kuroko. All equipped with special traits the members meet again during matches to settle scores. Outside of the rivalry stands Kagami. Kagami, who has just returned from The United States, is a confident and arrogant individual. He has joined Seirin High and the Seirin Basketball team to defeat all of the members of the generation of miracles. Kuroko aids him in his quest as he learns how tough they are and he also learns to be more of a team player

Kuroko Tetsuya: Is the main protagonist of the anime. Kuroko is the jack of all trades on the court… But there’s one little hiccup… he can’t shoot. Tetsuya once was a part of the Generation Of Miracles.

Kagami Taiga: After returning from the The United States, playing Street Ball on the streets and honing his skill; Kagami joins Seirin High to play against the generation of miracles. Kagami is stubborn and refuses to give up no matter how tough the situation. Kagami strives to be the best, ever.

‘Kuroko No Basket’ has two seasons, both containing 25 episodes and is announced to have a third in 2015.

‘The Boondocks’ is an animation that airs on Adult Swim. Created by Aaron McGruder based on his comic strip of the same name in his student newspaper, The Diamond Back, animated by Rebel Base Entertainment Studios.

‘The Boondocks’ follows the daily lives of African Americans in suburban America in the style of a sitcom. The story is set in Woodcrest a mostly white neighbourhood, where an elderly man’s two grandsons have just moved in. The Freemans – Robert Freeman, Huey Freeman and Riley Freeman – spend the remainder of their lives in suburbia, but have trouble maintaining friends and scare potential residents away. The story also follows the, The Dubois Family, the Freemans’ next-door neighbours who consist of Tom Dubois, Jasmin Dubois and Sara Dubois. Uncle Ruckus is a heavy set man who believes he has ‘the opposite of what Michael Jackson had’. Uncle Ruckus believes he was once white and seems to have every job in Woodcrest. Ed Wuncler, Sr. the owner of Wuncler Industries relative to the founder of Woodcrest , Ed Wuncler III, Grandson of Wuncler, Sr. and a drunk ex-military nicknamed ‘Stink Bomb’ for revealing their position on missions due to his faeces. Gin Rummy an ex-military turned hired gun who works for Wuncler industry and a terrible bank robber.

Huey Freeman: Huey is a radicle activist titled as a ‘domestic terrorist’ and he’s not afraid to speak his mind no matter how controversial. He is the voice of reason and a martial arts expert. Huey spends his time protesting, dealing with his Granddad’s antics, getting his brother out of trouble or trying to kill his brother…

Robert Freeman: Robert is a retired WWII veteran who now spends his time speed dating. Or catching up with his old friend Uncle Ruckus. Robert Freeman

The show is currently in production on its 4th season. Season 1, 2 and 3 are finished with 15 episodes. The episodes are in English, but it also has a Japanese dub and a French dub.

Have you seen any of these? What are your favourite anime? Let us know: @rifemag