It doesn’t stop there though.

‘Men have always raped women from as far as we know and they’ve hidden it, but you couldn’t hide it on the plantation, where you had first generation African women having children […] who were mixed race.  How did the white men try to legitimise it? Well, these poor outstanding, good Christian plantation owners could not control themselves in the face of the animal sexuality of these black women. The onus was placed on the shoulders of these black women, and it worked.’

Black women were seen as exotic and sexually different. Their bodies were scrutinised by white imperialists who marvelled at their large asses and dark skin. You had exhibitions where black women would stand naked on podiums while white people would pay to look at these strange ‘Hottentot Venuses’. 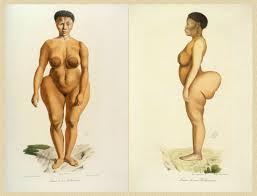 Here’s a fact sheet from 4YP about pornography

What do you think? Let us know @rifemag Adibah Iqbal is a young filmmaker, using media and the arts to highlight topical issues affecting her community. She is currently working on a play that discusses motherhood in the Asian community and is soon to start directing a film on feminism and young women. She is actively involved in the Bristol voluntary sector, working with Salaam Shalom Youth Council, Watershed and Icon Films. She believes that minority voices are not always represented fairly in mainstream media and that the best way to tackle this is to create your own media. She was part of the Creative Talent Lab in Bristol in February 2014 and a founding Young Journalist for Rife magazine. Politics. Understand a word of it?